Solo thru the Grand Canyon

Posted by Chris Hipgrave on November 8, 2014 in Adventure | Leave a comment

Paddling thru the Grand Canyon was always on my radar but I was in no hurry. I figured it was something I’d do later in life. But a 2010 invitation from a great group of friends changed that. That initial trip was 16 days of paddling, eating well, hiking and camaraderie but more than anything, it open up my eyes to the endless wilderness paddling opportunity the grandest of river canyons had to offer. 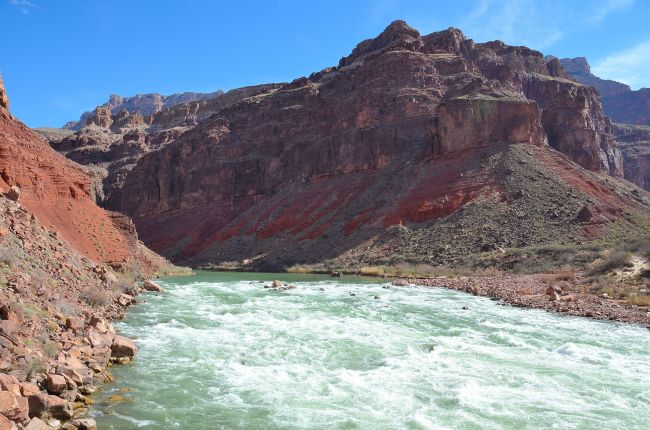 My only frustration with that initial trip was the rafts. We’d waste 3 or more hours a day rigging and unrigging the rafts and that time seemed better spent exploring this incredible place. Consequently all my return trips have been self supported, kayak only descents of the Canyon. Self supported kayak trips are so incredibly flexible from every aspect and are combined with a speedy more maneuverable platform from which to explore the river.

Feeling confident with my equipment choices fine tuned over several years and multiple Grand Canyon descents, I decided in 2014 to do a fast, solo, kayak self supported descent. The idea was to challenge myself physically and mentally in this magical environment during the Winter months when the weather could be unpredictable and other river traffic would be at a minimum.

Day #1 – I launched at dawn on Valentines Day after spending a couple of days exploring Lees Ferry and getting thru the standard check in procedures with the officials. I put the hammer down right out of the gate and in under two and a half hours, caught up with some friends that had launched a day earlier and camped at mile 22. They were just returning from a morning hike when I rolled in, so once they were loaded we paddled together downstream to explore Red Wall Cavern and then moved on down for a hilarious hike thru the Silver Grotto, which I believe to be one of the most fun side canyons in the entire Canyon. We camped on this amazing beach at mile 38 and watched the sinking sun play with the colors of the canyon walls. 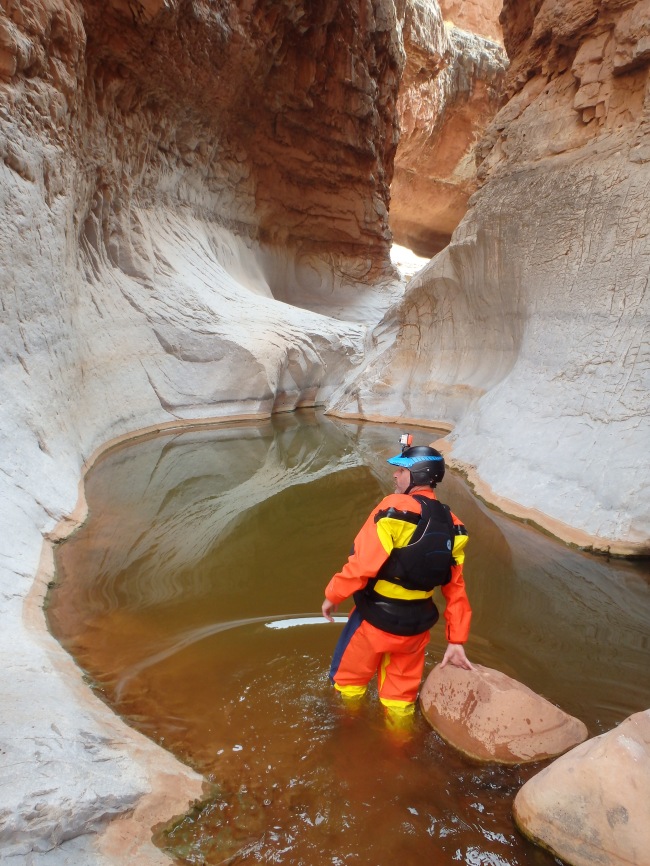 Day #2 – I launched at dawn after saying my goodbyes and once again put the hammer down and treated most the day as one long workout. This was my first full day on my own and it flew by. I also got my first taste of some of the larger rapids, which proved no problem but it did raise the intensity level somewhat. Despite knowing these rapids well, floating into them solo, deep inside a canyon miles from anywhere gave me pause for thought and had me going thru the lines in my mind. Exactly 50 miles and 6 hours later, I found this beautiful camp site called June Bug (88) right above Phantom Ranch and proceeded to eat everything I could get my hands on and then called it a night.

Day #3 – I went too hard yesterday. I was a bit sore but pumped to get going and tackle the most fun series of rapids in the Grand Canyon. I promised myself I’d slow down today, look up more and enjoy being deep inside one of the most beautiful places on Earth. The larger rapids were so much fun and it was a fantastic feeling just rolling into famous rapids like Horns and Crystal and nailing the lines with nothing to prove to anyone my myself. The rapids flew by and before I knew it I was setting up camp across from Deer Creek Falls at mile 138, tired but happy.

Day #4 – The cumulative affects of the last three days were starting to be felt in addition to which, it was hot and sunny further adding to the feeling of being drained. The miles didn’t come easily today as a result, but regardless it didn’t feel long before I came around a corner to see the Devils Anvil, signifying I was just a mile above the largest rapid in the Canyon, called Lava. Sitting in the pool above the horizon line at Lava I was going thru the choices. Option one, take the main line thru the big waves and curlers or two, sneak it down a more technical left side that would be more conservative. I opted to take the conservative left line and immediately regretted the decision. This would be the only rapid on my entire 226 mile journey I would make this choice with and it’s a decision I still wish I hadn’t made. With the decision made and an uneventful run of Lava, I floated 5 more miles downstream to camp at Whitmore Wash (mile 185). I was tired and disappointed in myself for not running the main line at Lava. Knowing I had just one more day left, I sat down, enjoyed the incredible view, ate my fill and had an early night in hopes of waking up mentally and physically refreshed.

Day #5 – Even though the canyon walls pull away from the river in this lower section, the scenery is still stunning especially in the Granite City area. The miles did fly by and I was feeling great. Knowing the trip was coming to an end was also bitter sweet. I pulled into camp just above my take out at Diamond Creek (mile 226) around lunch time and spent the afternoon exploring the area and local side canyons realizing that within 24 hours I’d be assimilated back into reality. It was a reflective time and I wasn’t ready for the adventure to end. Tomorrow morning I’d float the short distance to the take out and the journey would be complete.

Physically, the miles wore me down as a result of the cumulative fatigue, but it was totally manageable with adequate rest, food and hydration. I paddled on average about 7 hours a day and feel confident I could have done much more. But a faster trip would mean more pressure and less time to look up and enjoy the majesty of the Grand Canyon, so this 5 day plan seemed to be the perfect blend of challenge and enjoyment. Mentally, I did find the shear size and magnitude of the Grand Canyon weighing on my mind, especially when in the inner gorge where the narrow canyon walls were imposing their presence. Being on your own in such a vast expanse of wilderness makes you feel very small and yet, so connected to the environment. I can’t wait to do it again.