Posted by Chris Hipgrave on April 15, 2015 in Competition | Leave a comment 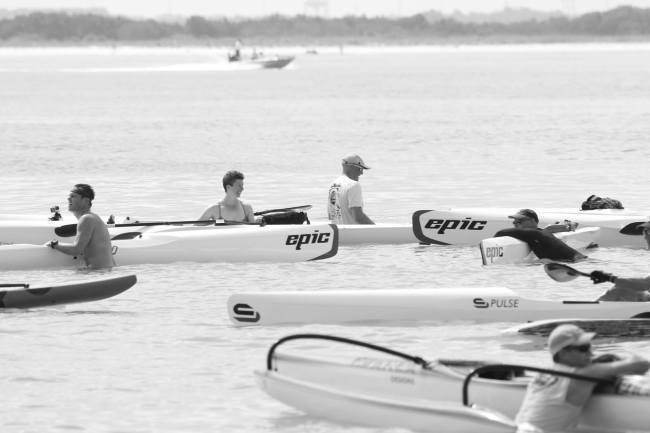 The 12th Annual Shark Bite Challenge is a spectacularly organized event in the Gulf waters off of Honeymoon Island State Park, Florida. The event was capped at 250 competitors challenging themselves over several distances and in a wide variety of craft including OC6, OC1, prone boards, SUP, sea kayaks and of course surfski’s. This is the largest event of its kind on the east coast. The event also attracted athletes from all over the country to the promised warmth of a Florida Spring where I had a chance to catch up with friends I’d not seen for years, meet Facebook friends in person and make plenty of new ones. Most importantly, I also had a chance to enjoy some sun, sand and downtime with my beautiful wife.

After a day exploring Tampa Bay, including the surprisingly well done Weedon Island State Preserve, it was game time. Lining up next to many of the best paddlers I know (and many I didn’t), added an air of intensity I’d not felt this season. Right from the starting gun I knew I was in trouble. I’ve always struggled to race to my potential in hot weather and with a fast start and jockeying for position already underway at the pointy end of the pack, I quickly realized this was going to be a personal battle to manage the intense heat. My heart rate monitor was telling me the same thing. Six minutes into the race my heart rate hit its event peak of 191bpm, which is ludicrously high for me.

By the 2 mile buoy, the two race favorites of Reid Heyl and Jesse Lishchuk had broken away and where engaged in there own duel that would last all the way to the finish. Our chasing group of 4 boats had an international flavor with an unknown South African, Matt Wise (AUS), Eric Mims (USA) and myself (GBR). But I was struggling as was the South African and before the 4 mile buoy we’d both dropped off.

As we turned the 4 mile buoy a light head wind had set in and some small, playful countering swells had developed to help us along. I instantly felt cooler, my stroke rate went up, the speed went up and I started working every single bump I could find to close what had become a 10 boat gap to Mims (USA) and Wise (AUS). I worked everything I could find and took a deeper water line and to my pleasant surprise, I had closed the gap and was back into the group by the 6 mile buoy.

For the next mile or more I did nothing but focus on the stern of Matt Wise (AUS) paddling an Epic V10L with Eric Mims (USA) in his Epic V12 in front of him. It was clear we were going to have a sprint finish. With a half mile to go I made a move around Wise and sandwiched myself between him and Mims. Eric and I have been dueling it out over the last few years and we know each others strengths and weaknesses very well. Consequently the shenanigans started about 400 yards out when Mims picked up the pace. Matt Wise and I were able to respond but at 250 yards Eric kick hard again … really hard. Wise’s broke and I tried to stay on Mims wake for as long as possible but it wasn’t good enough. I fell off his wake and limped to the finish for 4th place behind (3rd) Eric Mims, (2nd) Reid Heyl and (1st) Jesse Lishchuk. 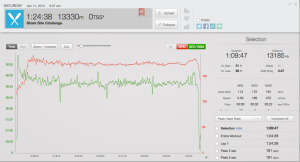 It had been a heck of a race. My poor performance in the crazy Florida heat reminded me that I have a problem that I need to figure out. But being able to pull back the 10 boat gap back to Eric Mims whom I regard as one of the best ocean paddlers I know, really gave me a sense of accomplishment I know I can build on this coming season.

The Shark Bite Challenge is an amazing event that every ocean paddler needs to put on their bucket list. It is incredibly well organized and capped at 250 competitors only because of insurance constraints. If they can lift that ceiling, this event will blow up to be even more significant than it already is.