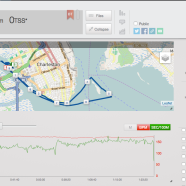 Posted by Chris Hipgrave on September 23, 2015 in Competition | Leave a comment

Historical and beautiful Charleston, SC hosted the Chucktown Showdown this past weekend, and it was a grand display of the health of paddlesports with over 200 participants on SUP’s, surfski, outriggers and kayaks. The incredible weather only magnified the beauty of the Charleston peninsula which is best observed from the water anyway.

The race itself takes in some of the best historical attractions that Charleston harbor has to offer, (if you can find the time to sit up from the race and look around.) From the start at Brittle Bank Park on the Ashley River, you paddle under the Ashley River Bridge, past Charleston Marina and the slew of multi-million dollar boats, and then along the shores of old “Charles Towne” following the historic Battery wall. You continue to push against the incoming tide past Revolutionary War battle sites and great views of Fort Sumter at the harbor mouth, the location where the Civil War began. You see the USS Yorktown aircraft carrier from World War II, and then circle around Shutes Folly Island and Castle Pinckney which was used to protect this city centuries ago, before heading back to the Battery and the finish in modern day Charleston. Truly a paddle through history!

The Showdown would also be my last surfski race of the season and one last opportunity to test myself against my peers. After another fast start it was deja-vu with myself and Eric Mims leading the pack and taking it in turns to distances ourselves from our pursuers. Once out at the head of the Battery the harbor came to life with choppy and sloppy conditions magnified by the peak incoming tide. Eric’s rough water experience gave him a short lead as we rounded Castle Pinckney but confusion on where to head next meant I went directly for the next buoy while Eric made a critical line error erasing his lead and bringing us back together as we made the final tight turn to surf back to the Ashley River. Once again, his technical prowess on the rough allowed him to open up another tenuous lead as we headed past Charleston Marina and the finish line at Brittle Bank. I again fell short to a superior athlete but was much happier about the effort, my preparation, strategy and execution. A good note to end the season on and start scheming for the next. Behind us, a tight pack of pursuing surfskis paddled across the line led by Mark Volkmann and a fast chasing Mark McKenzie and Laurens Willard.