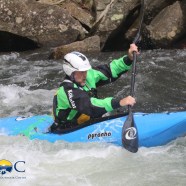 Pyranha’s 9R has received much buzz and acclaim since its debut but the one available size limited its reach to those of us outside of “average.” Pyranha responded with the announcement of a “9R Large” and after months and months of waiting they have finally arrived State side. So it was with some excitement that I received the opportunity to grab a 9RL hot out of the container from Runcorn and put it thru its passes over the course of a week in a variety of locations.

The first thing you notice in the 9RL is its size. The original 9R has slender, curvaceous lines but the 9RL has gained some volume and although those lines of the original are there, they are not as appealing under another 12 gallons of volume (78 gallons v 90 gallons). Boat weight also predictably climbs from a feather weight 43lbs in the 9R to 50lbs in the 9RL. But the boat remains under the magic 9ft length so if it’s going to float some larger folks, it needed to gain some volume somewhere. The deck has been peaked, especially in the stern and the grab handle configuration completely changed with the addition of a security bar and a relocated drain plug. On paper the large is only 1.5 inches wider than the original (25.2” v 26.7”), but the sidewalls also appear to have been widened and the stern edge softened. The stern rocker has also been tweaked and there is now a soft V running down the stern to improve tracking.

Inside, both 9R’s are outfitted with Pyranha’s popular Connect C4S system but the large now features the new “Stout Seat” which greatly simplifies things. While the ability to adjust the seat is back to just a few points, the seat gives up nothing in comfort and continues to give great contact and feedback, reinforcing that a comfortable outfitting system does not need to be complicated.

On the water, the 9R is everything it is touted to be as a fast, performance oriented creek boat that feels dynamic yet predictably comfortable and a design that will respond to an aggressive paddling style. The defined bow rocker and the interesting wave deflectors allow the 9R to resurface and accelerate out of holes like no other. Simply put, the 9R is ridiculously fun once you get the hang of it and you see huge smiles on all those that demo it. 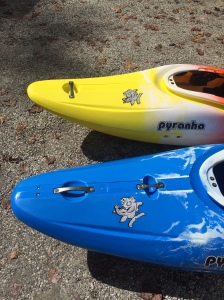 But for my long frame and inseam, the 9R is a struggle to squeeze into and the 9RL solves this easily with that comfortable new “Stout Seat” coupled with much more room for my long legs, (although the bulkhead only just went down far enough). At the lower end of the optimal weight range on the 9RL, the results were very different from the original. At 190lbs/86kg I fall in the upper range of the 9R and the lower end of the 9RL with stated optimum paddler weights listed as 132-209lbs v 165-275lbs, so it’s little surprise that the two boats handle very differently. The large felt more stable and predictable but lacked a little of the magic and fun that I felt in the original but had hoped to find in the large. The large felt more like a true creek boat and didn’t need to be paddled as aggressively. However, it was easy to feel that as the weight of the paddler increased as would that magic feedback. This is not a criticism of the 9RL in anyway and more of a problem common to those of us at the extremes of the optimal weight ranges for boats from all manufacturers. Even Pyranha themselves explains the same thing in this 9RL video.

But is the 9RL fast? After all, that’s the common thread for this boat and a word used liberally to describe it. In one word, YES. I raced the 9RL in last weeks Ocoee Race which is 30 minutes of fairly continuous class 3 whitewater from shallow rocky moves to large wave trains and even a couple of significant flat pools. The 9RL remained well poised throughout the race with a nice dry bow that allowed the boat to maintain downstream speed. It was very easy to correct direction and get back on the power. The 9RL is a legitimate performance creek boat under these conditions.