Posted by Chris Hipgrave on February 11, 2016 in Gear | Leave a comment

After a 12 year run, the tried and trusted Dagger Nomad has finally been replaced by the new Nomad (aka Newmad). During those 12 years, what we paddle and how paddle has evolved, so it’s only fitting that this benchmark creek legend finally get to evolve too.

Production versions of the large Nomad started rolling off the production line this week and we’re very luck to be one of the first to bring home some new plastic. Over the coming weeks we’ll get a chance to put the Nomad thru its paces on a variety of whitewater, but having had the opportunity to paddle a few of the prototypes, we’re not expecting any surprises. 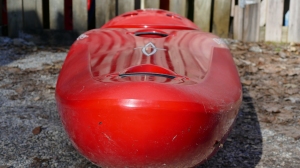 So what’s changed? To start with, the Nomad now comes in three sizes. The old Nomad 8.5 was just a little too small for many, so the new 9ft large Nomad is a perfect addition to the family. Ergonomically, the large Nomad feels to have slightly higher and narrower knees than the large Dagger Mamba making it feel slightly smaller overall, and it is noticeably smaller than the voluminous large Jackson Karma. That additional length helps make it faster and it still remains a displacement hull creeker so it keeps its stability, predictability and forgivingness that the old Nomad was so famous for. The rocker and volume has also been changed to keep it a predictable resurfacing design and on the surface when you’re driving thru challenging whitewater. For us tall folks, those volume changes also give us a little more room around the feet and knees and I was able to jump right into the boat wearing my street shoes.

There are also some subtle esthetic changes to the Nomad. The tray in front of the Contour Ergo seat is gone for weight savings and despite not weighing the boat, my shoulder tells me that it’s not carrying too many excess pounds which will be a blessing on some of those long portages or access/egress hikes. The rubber tether securing the bulkhead nut is also gone (thank you). The bow and stern grab loops also feature a unique carabiner guide to aid you in finding a secure attachment point.

It must have been a daunting task to update one of the best selling whitewater boats in history, but Snowy Robertson and his team at Confluence have done an outstanding job. Over the coming weeks we’re looking forward to seeing what the Nomad can do in a variety of conditions and will report back once we draw some conclusions.