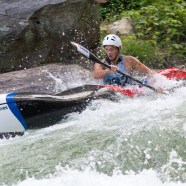 As the Winter comes to a close, so does the Winter series of whitewater races across the southeast. Each of the events wouldn’t be possible without the dedication and support of the host organizations that invest countless hours in the pursuit of delivering these massively successful events. They are a tribute to the health of the canoe club system that introduce so many to the sport we love.

The Locust Fork Invitational was first up in mid-February. Great water levels met us in Cleveland, Alabama as well as a fun slalom and downriver course. The slalom was wide open with a few long stretches that would allow us to test our full on speed. The downriver race was also made fun by great levels and some entertaining rapids.

The Glacier Breaker at the end of the month on the Nantahala River was the Nantahala Racing Clubs first event of the year. Graced with awesome weather for February, both the slalom and downriver races saw high participation from kids and stand up paddlers, giving the event a really fun community feel. The long downriver sprint of over 2 minutes was a bit of a wake up call to those of us using the event as a stepping stone to bigger events later in the year. Time to pick up that training!

The first weekend of March took us back to Alabama and the Mulberry Fork Canoe and Kayak race. We once again found incredible weather and water levels. The slalom course was very unique with an opening attainment between gates and a stacked series of upstreams at the very end making for a very technical and physically demanding course. The downriver race was equally stressful. The long 20+ minute course had easy but shallow whitewater, forcing a high effort, made even more difficult by an upstream wind.

The Locust Fork Classic back in Cleveland followed, then just a week later the series finale, the Nantahala Racing Clubs, US Open. The slalom course was on the tricky Nantahala Falls but many of the participants would be chasing an Olympic berth later in the year and using this slalom competition to fine tune and test their campaign. The downriver also featured a testing sprint thru the technical Pattons Run and a great classic race thru some of the Nantahala’s iconic whitewater.

These 5 Winter events are tremendous fun for any whitewater paddler and put something on that calendar when it’s all too easy to find excuses not to be active. Fun tops the list at every event and provide just enough physical and technical challenges to set things up for a great season ahead without them being over the head of even the weekend warrior. But more than anything else, these events show case the strength of the host canoe clubs and the volunteerism that is so prevalent within them. Congratulations to all those that competed, but more importantly, congratulations to the Nantahala Racing Club and the Alabama Cup Series Racing Association for hosting a wonderful series of slalom and downriver races.