Posted by Chris Hipgrave on June 23, 2016 in Competition | Leave a comment

Today we celebrate Olympic Day. Olympic Day was introduced in 1948 to commemorate the birth of the modern Olympic Games on 23 June 1894 at the Sorbonne in Paris. Every year the International Olympic Committee encourages everyone – regardless of age, gender or athletic ability – to get active on 23 June.

Olympic Day is much more than just a sports event, it is a day for the world to get active, learn about Olympic values and discover new sports. Based on the three pillars move, learn and discover, National Olympic Committees, like the US Olympic Committee are organizing sports, cultural and educational activities throughout the world. 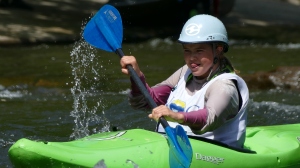 Some countries have incorporated the event into the school curriculum and, in recent years, many organizers have added concerts and exhibitions to the celebration. Recent activities have included meetings for children and youth with top athletes and Olympians and the development of new activity programs. This makes it easier for everybody to become part of Olympic Day.

This past weekend, we celebrated Olympic Day at the Nantahala Outdoor Center with our own celebration of sorts. Olympic Gold Medalist, Joe Jacobi joined Olympians Mark Hamilton, John Burton and Horace Holden in a series of events that revolved around the Nantahala River.

We then wrapped up the day with a fun whitewater slalom competition. Whitewater slalom debuted in the 1972 Games where John Burton competed. It wouldn’t permanently return to the Olympic stage until 1992 when Joe Jacobi and Scott Strausbaugh would earn their gold medal. 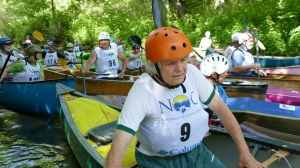 On Sunday we held the 48th annual Southeastern Championships, which is the longest running downriver race in the country. 40 competitors lined up along side many of our Olympians including Mark Hamilton who was a flatwater sprint athlete but also no slouch on whitewater. Mark would finish the 8 mile race in a close second just behind US National Team member, Kurt Smithgall.

Our Olympic Day weekend highlighted everything positive about the Olympic values. To quote the IOC “Olympism is a philosophy of life, exalting and combining in a balanced whole the qualities of body, will and mind. Blending sport with culture and education, Olympism seeks to create a way of life based on the joy found in effort, the educational value of good example and respect for universal fundamental ethical principles.”