Posted by Chris Hipgrave on August 10, 2016 in Competition | 3 Comments 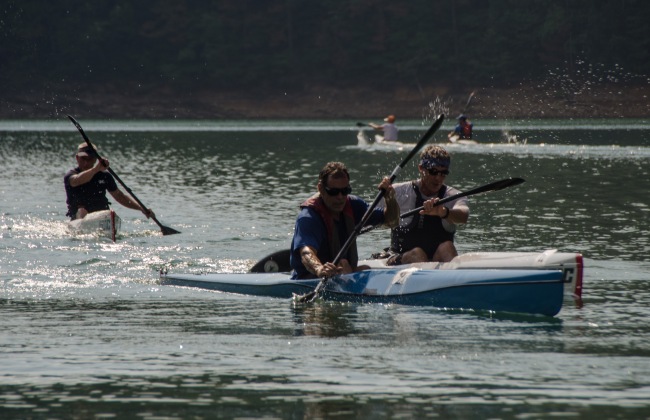 Nestled at the southern foot of the Great Smoky Mountain National Park, Fontana Lakes cool emerald green waters offer a unique venue for a race. While most of the east coast is sweltering in heat, the mountains provide cool respite and an attractive venue for recreationialists, enthusiasts and expert paddlers looking for a mid summer test of fitness.

The 2016 Nantahala Outdoor Center, Paddle Grapple race was based at the famous Tsali Recreation Area normally known just for its mountain biking. But Tsali offers a great launching point for a circuit race out and around Indian Island and back for a 3 mile loop. Racers would choose between a one lap 3 mile race or a two loop 6 mile race.

With all 90 registered paddlers packed into the cove at the Tsali boat ramp, the start gun sounded and the mirror flat water of Fontana Lake was transformed into a turbulent mess as everyone bolted from the start to establish solid positioning for the race ahead.

I took the lead with Eric Mims right behind followed by a familiar list of challengers that included Sven Jonsson, Pete Green, Elmore Holmes, Terry Smith and others. As race director I had only had a few minutes warmup before race start but was able to use every thing the lake would give me to get a small gap on Eric. As we circled around the back of Indian Island and headed back to Tsali for the second lap, an impressive string of paddlers could be seen across the entire race course all pushing themselves towards a strong finish. 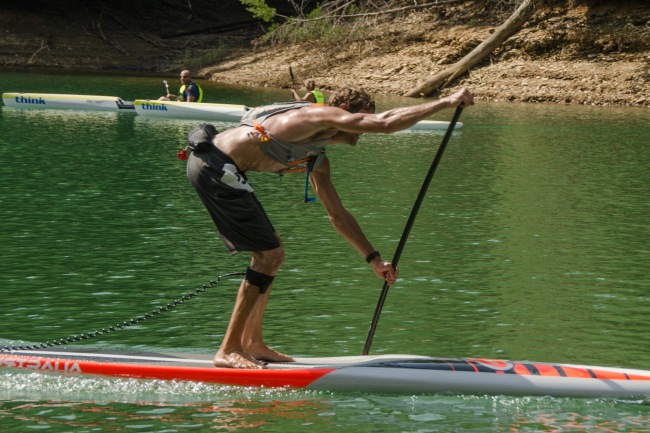 At the turn around into lap 2 I had a small gap on Mims, but my race director role would now require me to check in with those at the back of the race. I wasn’t too disappointed as the huge effort to try and stay ahead of Mims was taking its toll. I pulled to the side and let Eric pull along side so I could tell him what I was doing. After we chatted for a little bit he dug back in again and would maintain the lead all the way to finish and an overall win.  Behind him the competition was fierce. Several packs of kayakers were trading the lead trying to break one another with huge efforts. The canoe competition was equally fast paced with Olympian, Lecky Haller duking it out with perennial winner Andy Kluge. Everyone finished spent but seemingly satisfied with their effort and the picturesque course that Fontana Lake had graced us with. 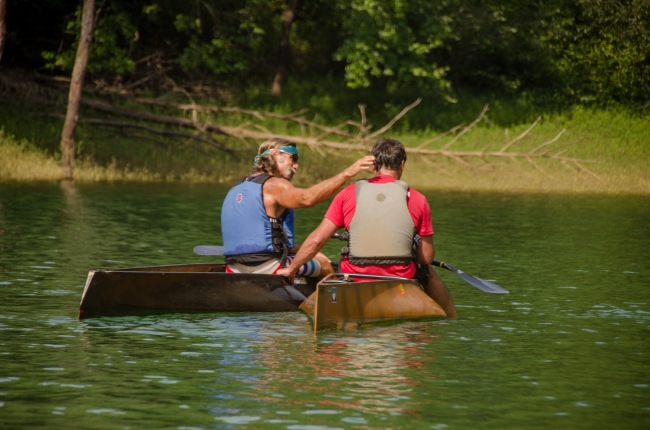 The Paddle Grapple would not have been possible without the amazing competitors that traveled far and wide to join us, from a great team of staff and volunteers or the cooperation of the US Forest Service and NC Wildlife. It also enjoyed huge support from the Nantahala Outdoor Center, Dagger Kayaks, Epic Kayaks, Motionize, Vaikobi, Kayak Trader and Coke. Thank you all!