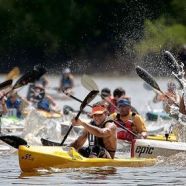 Posted by Chris Hipgrave on June 22, 2017 in Competition | Leave a comment

This article is reposted with the kind permission of its author, Elmore Holmes. You can read his original post, here. Thanks Elmore!

The Outdoors, Inc., Canoe and Kayak Race is in the books for another year.  This event has now happened 36 times, and I have participated myself 22 times.

Today’s river level–13.5 feet on the Memphis gauge–was what I would call a very “average” level over all those years.  The day was expected to be a steamy one, but thanks to some showers last night the temperature was surprisingly comfortable as we prepared to get started.  There was a trade off, however: part of our relief from the heat was provided by a stiff south wind, and that same wind would make for choppy conditions and slow times on the race course.

More than 220 boats maneuvered into position at the starting line in the mouth of the Wolf River–possibly the highest turnout ever, I understand.  I doubt anybody would have disagreed that the pre-race favorite was Mr. Mike Herbert of Rogers, Arkansas.  A three-time Olympian and a three-time world championships medalist, Mike has a resume not too many people can match, and he continues to race at a high level in his fifties.

The gun went off, and sure enough Mike shot right to the front of the pack.  But I knew he was not the only force to be reckoned with in today’s field.  The fastest starter was actually a 17-year-old Oklahoman named Garrett Wampler, an aspiring flatwater sprint racer.  If this race had been entirely on flatwater I think Wampler might have left us all in the dust.  But once we were out on the Mississippi it became painfully clear that his K1 was not a good boat for those sloppy waters.  He stuck close to the bank and quickly fell off the pace, and I understand he later flipped.  Still, I have filed his name away in my mind as one to watch for over the next two or three Olympic quadrennia.

Another fast starter was Chris Hipgrave of Bryson City, North Carolina.  Chris is a guy I’ve known out on the race circuit for nearly twenty years, and when he’s at his best I can’t touch him, but in several races over the years I’ve finished tantalizingly close behind him.  Today it quickly became apparent that he was in “can’t touch him” form.  He and Mike broke away from the rest of the field, and from where I sat it seemed Chris was really taking the fight to the Olympian.

By the end of the first kilometer I was alone in third place, but there was no time to rest on that laurel, for I knew people like Rick Carter and Kata Dismukes couldn’t be far behind.  Rick, who hails from South Carolina, has become something of a nemesis in the last several years with his wily racing tactics and his competitive tenacity.  Kata, a resident of Memphis’s eastern suburbs and the top female racer in this part of the country, has proven herself entirely capable of taking me down if I don’t have my game in order.

So the pressure was on.  But I have to say that I was feeling really, really good in my boat.  Over the last month I had put in a steady diet of hard, fast pieces, and by the end of that period I felt I was moving the boat with authority and recovering quickly from each hard interval.  Having logged some valuable rest this past week, I was feeling as fresh as I’ve ever felt in the middle of a five-kilometer race.  Once I’d settled into my mid-race pace after the initial sprint off the starting line, it felt like a recovery interval.  That gave me the confidence to throw in a 30-second surge every several minutes in the hope of increasing my lead on the racers behind me, knowing that I would have something left for the final dash to the finish line in the harbor.

Meanwhile, I was watching the race up front.  As Chris and Mike approached the mouth of the harbor Chris appeared to have a solid boatlength on the Arkansan.  Chris was a member of the U.S. wildwater team for a decade or so–“wildwater” is downriver racing through whitewater rapids–and I expect he was drawing heavily on that experience.  Soon, however, they would be on the harbor’s flatwater, and that’s very much Mike’s domain.  (That’s one of the things I’ve always loved about the OICK race, the way it brings together athletes from different paddling disciplines–whitewater specialists, flatwater specialists, open water specialists, sprinters, masters of endurance… you name it, they have raced here.)

I reached the harbor entrance myself a minute or so behind Mike and Chris, and as I rounded the southern tip of Mud Island I stole a glance over my left shoulder.  I could make out only a white blur, but I knew it was Rick’s boat or Kata’s boat or both.  Seconds later the finish buoys came into view some five or six hundred meters distant, and I began to sprint as hard as I could.  I knew it would hurt, but not any worse than those sprints I’d done with Kata and other local paddlers out at Shelby Farms this month.

Mike did indeed out sprint Chris in the harbor, taking the overall victory by six seconds.  An agonizing 66 seconds later I moved my own boat across the line for a satisfying third-place finish.  I turned around just in time to see Rick claim fourth place, with Kata taking the overall female crown two seconds behind him.  A half-minute later Memphian Jason Salomon and his daughter Ahava finished first among tandem kayaks.

Among the other notable finishers were tandem canoe winners Dale Burris and Don Walls.  Dale is from Russellville, Arkansas, and Don lives in the neighboring town of Dover.  Andy Capel of Sherwood, Arkansas, won the class for touring kayaks longer than 17’6″, edging out Tim Schramm of Jackson, Tennessee, by less than one second.  Memphian Tonya Tittle was the fastest female in that same class.

The complete results are posted here.  As I mentioned before, the times were slow across the board today because of the wind and turbulent water.  Mike Herbert’s best time on the course is more than three minutes faster than his time today of 18 minutes, 53 seconds, for example.  I, too, have produced a time more than three minutes faster than what I managed today (20:05).

But that’s all just part of the fun.  Having completed a good hard-fought contest, we carried our boats up the bank into Mississippi River Park for a post-race festival of live music and camaraderie, culminating in the awards ceremony.  A few of us even indulged in the beer provided by one of our local breweries.  I believe I speak for just about everybody involved as I thank the principals and staff of Outdoors, Inc., for carrying this wonderful event past the three-and-a-half decade mark.