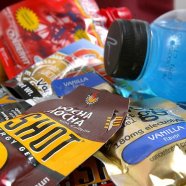 A well researched and practiced nutrition plan for Chattajack is very important, especially so for the later stages of the race where stories of spectacular bonks in the closing miles are too common. However, that plan will be different for everyone. Just because it worked for your buddy, doesn’t mean it will work for you.

BONK – MATH
Calories are simply units of energy. In simple terms, the harder we paddle, the more calories we’re going to burn in order to fuel that effort. Bigger folks will burn more calories than smaller. The weather can even impact calories burned.

Carbohydrates are your bodies preferred fuel source of calories to create this energy in the form of glycogen. While everybody is unique, the average glycogen reserves in the body are roughly 1,400 calories in muscles and 360 calories in organs. That’s approximately 1760 calories total. Our bodies also metabolize fat into calories at the same time but in much smaller quantities as glycogen remains plentiful. From experience, I know I’ll be burning 500-600 calories per hour at Chattajack. So if I finish in four hours, I’d have a simplified deficit of -240 to -640 calories. And when your glycogen stores become depleted, you get the infamous BONK or “hitting the wall.” The muscle-glycogen bonk is where the brain works fine but body doesn’t. The blood-glucose bonk is where the body works fine but the brain starts tricking you to slow down, maybe even with hallucinations. Both feel terrible. But the good news is that every Chattajack bonk is avoidable and is the result of a combination of poor decisions regarding hydration and training, exasperated by gastric-intestinal (GI) issues and bad nutrition choices.

Given this predictable caloric deficit, an endurance athlete will need to do some caloric supplementation for a successful Chattajack as our bodies burn thru its preferred energy source. But there’s a limiter! Your body cannot digest more than 1g per minute (60g per hour) on average, of a single source carbohydrate (e.g. dextrose), even if digested in large quantities like an overly sugared sports drink, gel or bar. There are 4 calories per 1g of carbohydrates, therefore 60g of carbs provides 240 calories per hour of maximum absorption. Anymore than this and you are likely looking at GI distress, which also sucks! Some advanced sports beverages contain multiple sources of carbohydrates (glucose, fructose, and maltodextrin), and can increase this absorption up to near 90g (360 calories) per hour, as they use different transport pathways. However, training your gut to handle these higher carbohydrate loads is absolutely critical and should be practiced in training well before the race itself.

So putting this all together … you’ll likely be burning calories at a faster rate than the maximum digestible rate of 240-360 calories per hour. So the goal is to minimize that caloric deficit with a measured consumption of quickly utilized carbohydrates from maltodextrin, glucose or dextrose, sucrose, and fructose, in order to avoid the dreaded bonk, maintain optical performance and eliminate GI issues from consuming too many carbohydrates.

CONSUMPTION
Common products used on race day include sports drinks, energy gels, bars, and chews. What ever solution you choose, make sure you practice it in training. Nothing spoils a race more than GI distress or bonking. I will personally be using a combined hydration, electrolyte and calorie solution called BETA FUEL by Science In Sport (SIS) which was designed for pro cycling teams. This simple solution keeps the fuss to a minimum and it’s a solution I have used for years, so I know it works for me and my stomach. More importantly, it’s basically a hands free solution as I’m not using gels or bars. I just grab the drink hose and stick it in my mouth and then I’m straight back to paddling while I drink. One missed stroke at the most. Why is this important? If I am shoulder to shoulder with a competitor and I see them slow to grab a gel or water bottle, the first thing I am going to do is accelerate so they have to forget the idea of drinking or drop off the wake. It’s one of the simplest ways of breaking a competitor in a long race!

CAFFEINE – A PERFORMANCE ENHANCING STIMULANT
Caffeine is a much hyped stimulant found in many sports drinks, gels and bars because it’s been shown to help maintain blood glucose concentration, reduce power loss, reduce fatigue and perceptions of effort, discomfort, and even pain. But it’s important to experiment with caffeine in training as some won’t respond well to caffeine with symptoms such as a GI distress, racing heart, twitching, and even enhanced race anxiety. Providing you can tolerate it and feel you are gaining a performance boost from it’s consumption, studies suggest taking in 100-300 mg of caffeine (1-3 cups of coffee) in the 2-3 hours leading up to race start and another 25-50 mg of caffeine taken hourly during the race or during the later stages of the race when you may need a boost. However, these same studies also show that if you are a regular caffeine user (coffee, tea, energy drinks, etc.) then the benefits of caffeine consumption for athletic performance gains, are negligible at best, as your body has become familiar to its presence in your system. Some pro athletes eliminate caffeine from their diet for 10-14 days prior to racing in order to get the benefits of this performance enhancing stimulant, (although going 2 weeks caffeine free for many of us may prove difficult in itself.)

PRE-RACE TIP
All the details above discuss your nutritional needs during the race, but your nutrition and hydration plan should actually start in the days leading up to the race. Shift your daily calories towards quality carbohydrates as the races moves closer. This will ensure your glycogen fuel tanks are topped up and ready for the hard work ahead. Same goes with your hydration. Make sure you’re consuming enough water thru out the days leading up to the event. The goal is to make sure we aren’t starting the race already in a deficit. On race day, wake up early enough to get a familiar carbohydrate focused breakfast. You may even consider bringing a snack with you on the water as we stage for the start, just to top things off.

BIO HACKING – FAT MOBILIZATION
Our bodies actually have a lot of energy reserves in the form of fat, but as discussed above, our bodies would much rather use carbohydrates for energy. A 85kg (187lbs) person with 15% body fat has 12.75kg/12750g (28.1lbs) of fat. 1g of fat contains 9 calories of energy, so 12750g of fat equals a whooping 114,750 calories! There may be a way of bio hacking our ability of coercing these fat reserves into more action thru fasted training. Basically, this is training while having consumed no calories for at least 4 hours so our insulin levels are low. Some sports science studies support this methodology, providing you can stand it. I am experimenting with this fasted training method on my ramp up to Chattajack. You should only train fasted on your long low intensity sessions. On these days, I’ll wake up, have a glass of water and hit the lake, while only consuming water during the paddle, in an effort to teach my body to more readily mobilize fat as an energy source. I am hoping that this fasted training plus a practiced hydration/nutrition plan, will make me bonk proof come race day.